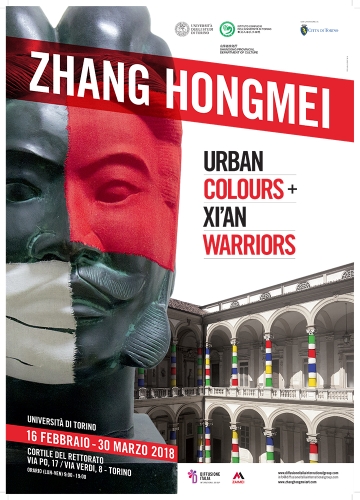 On Friday 16th February at 5.30 pm the great installation by the Chinese artist Zhang Hongmei "Urban Colors and Xi'an Warriors" will be inaugurated in the courtyard of the Rectorate of the University of Turin. The installation curated and organized by Vincenzo Sanfo professor of "Shandong University" of Jinan former curator of the Beijing Biennial and Professor Stafutti of the Confucius Institute of Turin, in collaboration with the University of Turin, Shandong Provincial Department of Culture, Diffusion Italia International Group and Shandong Zaimei Cultural, avails itself of the patronage of the city of Turin. The project, created by Zhang Hongmei for the Unversity of Turin, is a reflection on the theme of color in urban life and how color can change the perception of spaces and places. In this specific case, the intervention is on a severe architecture, historically characterized by architectural aspects of great charm. The intervention of Zhang Hongmei, therefore, aims, while respecting the pre-existing architectural aspects of giving a new reading to this place with the inclusion of elements, colored, derived from the Chinese tradition. The mixture, between the decorative taste, of the Chinese architectural tradition, is inserted, in the frame of a place, by the great Sabauda tradition, giving back a sense of calm reflection on how the inclusion of color can change the perception of the place. The columns of the majestic courtyard, clad by Zhang Hongmei of colorful inlays, made even more suggestive, a place, already beautifully characterized, and highlighting in an extraordinary way the splendid perspective of the colonnade. Perspective, which serves as a crown, for the installation of the Xian Warriors, dedicated to the heads of the Warriors of Xi'an, made of bronze, by Zhang Hongmei, from the original casts of the terracotta warriors who then covered with colored fabrics, tending to imitate the original colors that, after the excavations, and to the contact with the air, tend to disappear. Zhang Hongmei, with his intervention, brings to light fragments of these colors, through the use of colored fabrics, thus creating an effect of great charm and charm, which has already amazed and excited, thousands of spectators worldwide and which arrives for the first time in Turin.