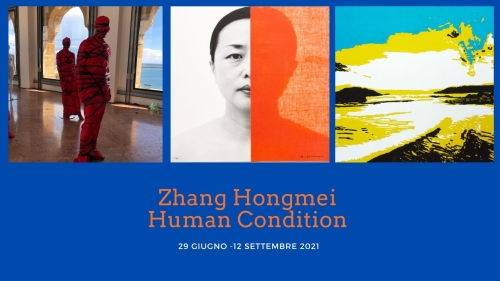 In the new SPAZIO MUSA, dedicated to art and culture, in Via della Consolata 11 in Turin, the works of Zhang Hongmei arrive who, after the great success of the "Urban Colors" installation held at the Rectorate of the University of via Po, which attracted thousands of visitors, returns to Turin, for the first time, with an anthological itinerary of his work, exhibiting works that span about ten years of activity, but particularly focused on the large installation Human Condition, created for the City of Palermo and commissioned by Mayor Leoluca Orlando for the visit of President Xi Jin Ping to Sicily in 2019 and who inaugurated the restored Loggiato di San Bartolomeo. Considered a rising star of the new international collecting, Zhang Hongmei has already had, despite his young age, a path of great interest with presences and exhibitions at the Center Pompidou, the museums of Coral Spring, Denver, Paris, Miami, London, Berlin, Madrid, Mexico City, Cairo as well as important exhibitions and awards both in Italy and in China. Currently it has been called to build an artist's church in the municipality of Magliano Alfieri, which will join those of Sol LeWitt and David Tremlett. Present in various editions of the Venice Biennale, her works are in important collections, both public and private, and the press and international media have dealt with her extensively. Accompanied by a text by Paola Gribaudo, president of the Accademia Albertina, considered one of the most successful designers of art books on an international level, the exhibition brings together two women with a strong personality who, each in their own field, are the representation of the epochal change that is investing the female universe to which, finally, justice and attention are paid. Zhang Hongmei, a professor at the Shandong University of Art and Design, dedicated part of her time to teaching in schools reserved for the handicapped, being a woman attentive to social education issues. She is currently active in the condemnation of violence, especially against women, which is also part of a short video of her denunciation, which will be previewed at Spazio Musa. On display there will be paintings, installations, videos, sculptures, jewelry, ceramics as well as a series of live links with the artist, currently in China, who will dialogue with the visitors of the exhibition. The project, accompanied by a text by Paola Gribaudo, is created by PierLuca Lobina, coordinated by Raffaella Ravazzani, with the collaboration of Vincenzo Sanfo and the support of Giorgia Sanfo, Clara Mussolin for Diffusione Italia and with the friendly attention of Madeinartgallery-Milan. Musa space Via della Consolata 11 Turin From 29 June to 12 September 2021 Hours 16 - 22 Closed on Mondays