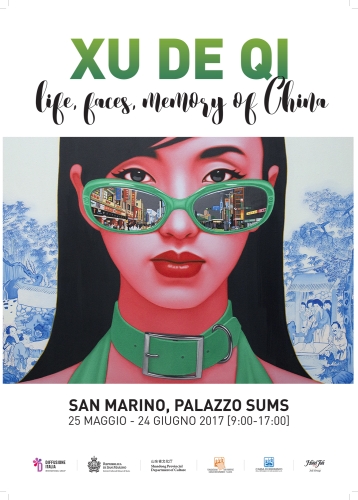 It will open to the public on Thursday 25 May at Palazzo S.U.M.S. (until 24th 06.2017) the exhibition of the artist Xu de Qi organized by Diffusione Italia International Group promoted by the Cultural Institutes of San Marino with the support of the San Marino Foundation Cassa di Risparmio - S.U.M.S. and of Cassa di Risparmio of the Republic of San Marino ", curated by Vincenzo Sanfo, The exhibition is a journey in the work of the last three years of one of the protagonists of the new contemporary Chinese painting and falls within the special initiatives of" Friendship Project "the San Marino pavilion at the 57th Venice Biennale. Xu De Qi participated in the 2015 edition and today, after two years, it is proposed again to the San Marino public and to the tourists that will crowd the small Republic. The exhibition is composed of about thirty works that investigate the new vitality and the new fashions that attract young Chinese people, but seen under a subtly ironic lens. The great technical capacity of Xu De Qi is combined with a fantasy and originality of thought combined with a joy of life; the protagonists of his works are mainly young Chinese women, movie and television stars who wink from his paintings to a colorful world, fantastically projected towards a future to be discovered. In particular, the latest works are a veiled criticism of the savage proliferation of dormitory houses that are filling China seen as opposed to landscapes taken from the famous blue and white porcelain from which emerge mischievous and winking faces of girls dressed in fashion. Xu De Qi's works are already well known in the West where he exhibited with increasing success both in the United States and in Europe where he is now among the most popular Chinese artists. A few weeks later the exhibition will open a personal exhibition in Shanghai dedicated to him that will invade the city to witness the great interest that is arousing his work. His works portray young Chinese girls mainly with sunglasses in which the reality of the new China is often compared with its past; his China Girl are sometimes surrounded by goldfish that testify to happiness and fortune in the Chinese imagination. And that is what Xu De Qi wants, to convey the happiness and the fortune of living in this extraordinary moment of change in Chinese society, so focused on new styles and ways of life. Head of a playful and joyful Pop Art, Xu De Qi's works convey a positive message full of hope in a better world that we all need in this tormented moment.