Impressionists.
At the origins of modernity 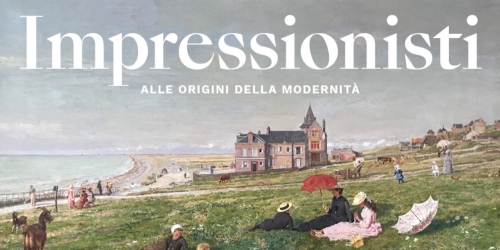 The exhibition, which received the recognition of the Medal of the President of the Republic, is promoted by the MA * GA Museum and the Municipality of Gallarate, with the collaboration of RJMA Cultural Projects and Diffusione Italia International Group, with the contribution of the Lombardy Region and the Cariplo Foundation, with the support of Ricola, institutional partner of the Museum, and Lamberti spa. The scientific direction of the exhibition is by Sandrina Bandera, Emma Zanella and Vincenzo Sanfo, with the critical contribution of Rosa Barovier, Paolo Castagnone, Gilles Chazal, Virginia Hill, Fiorella Minervino, Gonzalo Fernández Prieto. The exhibition, through paintings, drawings, watercolors, engravings and sculptures, leads the public along a path of discovery of the transformations of European visual culture in the second half of the nineteenth century, ranging from Realism, Impressionism and Post-Impressionism, and tells, as Emma Zanella writes in the catalog, "the definitive exit of art from the realm of myth and its compromise with modern life, a terrain in which to seek new beauty". The visit itinerary is divided - through the works of the artists who exhibited in the eight official Impressionism exhibitions from 1874 to 1886 - in a series of sections, marked by the titles of literary masterpieces of the late nineteenth century, in which the works interact with applied arts, fashion, music and literature. The first, entitled Correspondances as the famous poem, taken from Les Fleurs du mal by Charles Baudelaire of 1857, focuses on the relationship between man and nature and offers, among others, the masterpieces of Gustave Courbet, Claude Monet and Alfred Sisley, as well as to present the works of lesser known artists but of fundamental importance for the Impressionist revolution. The naturalist soul of Émile Zola that is found in his Le Ventre de Paris, stimulates a disenchanted and direct gaze on the violence and harshness of both urban and rural life, the same that is found in the works La barricade, 1871 by Éduard Manet or in La faneuse, 1890 by Camille Pissarro. The La Comedie Humaine section, from the collection of writings by Honoré de Balzac, analyzes the practice of portraying one's fellow painters and critics, poets, everyday friends, in a correspondence of senses and emotions that leads into the atmosphere of those years. On display a series of portraits including that of Bracquemond by Édouard Manet, that of Wagner by Pierre-Auguste Renoir, and the latter portrait in turn by Pierre Bonnard. À Rebours, the novel by Joris-Karl Huysmans, inspires the research of artists such as Paul Cezanne or Paul Gauguin who, in different ways, move away from the impressionist lesson to follow autonomous paths that will anticipate the birth of the avant-gardes. The exhibition continues with artists such as Auguste Renoir, Berthe Morisot, Giuseppe De Nittis, Giovanni Boldini and Federico Zandomeneghi, capable of representing the social transformations of what Baudelaire called La Vie Moderne (1863). The works on display are accompanied by precious original ceremonial dresses from the late nineteenth century, coming from a private collection, formerly owned by the Queen of Portugal and French noblewomen, and by Art Nouveau glass that bears witness to the fashion and modernity of Paris until de-siècle. The Nomos Edizioni catalog, edited by Emma Zanella and Alessandro Castiglioni, is enriched by scientific files dedicated to the artists and works edited by Vittoria Broggini, Alessandro Castiglioni, Francesca Chiara, Lorena Giuranna, Emma Zanella. The installations of the museum spaces of the MA * GA, specially redesigned for this occasion, are curated by Angelo Jelmini. During the entire opening period, in-depth activities will be organized, in person and online, through a rich program of appointments. Among these, we note the one organized by MA * GA and Ricola, Saturday 19 June, which will see the pianist Bruno Canino and the violinist Alessandra Sonia Romano perform music by Claude Debussy, Maurice Ravel, Pablo de Sarasate, Gabriel Fauré. Ricola, for the fourth consecutive year, will support the Gallaratese museum as an institutional partner, supporting the important exhibition and all the cultural activities scheduled for 2021. The Swiss company - producer of the beneficial 13 herb candies - confirms the great attention it gives always shows towards art and culture as a tool for growth and sharing. The Ricola free admission days also continue. On the first and third Friday of each month, from 14 to 18, the Swiss company will offer entry to all visitors and will welcome them with the tasting of its beneficial herbal teas at the MA * GA bar starting at 15. Lamberti SpA from Gallarate too confirms its support for the MA * GA, demonstrating the continuous commitment to the cultural enhancement of the territory and the well-established proximity to the city museum. The artists on show: Zacharie Astruc, Antoine Ferdinand Attendu, Emile Bernard, Henri Biva, Frank Myers Boggs, Giovanni Boldini, Pierre Bonnard, Eugène Boudin, Félix Bracquemond, Edouard Brandon, Adolphe Félix Cals, Mary Cassatt, Paul Cézanne, Renzo Colombo, Jean-Baptiste Camille Corot, Gustave Courbet, Giuseppe De Nittis, Edgar Degas, Marcellin Desboutin, Girard Firmin, Jean-Louis Forain, Dr. Paul dit Van Ryssel Gachet, Paul Gauguin, Thèodore Gericault, Ernest Jean Joseph Godfrinon, Norbert Goeneutte, Armand Guillaumin, César Helleu, Johan Barthold Jongkind, Gaston La Touche, Albert Charles Lebourg, Alphonse Legros, Ludovic Napoléon Lepic, Stanislas Lépine, Jean-Baptiste Léopold Levert, Edouard Manet, Jean Baptiste Millet, Jean-François Millet, Claude Monet, Berthe Morisot, Félix Nadar, Constant Permeke, Ludovic Piette, Camille Pissarro, Lucien Pissarro, Jean-François Raffaëlli, Odilon Redon, Frédéric Regamey, Pierre-Auguste Renoir, Emile Schuffenecker, Georges Seurat, Paul Signac, Alfred Sisley, Henry Somm, Henry de Toulouse Lautrec, Constant Troyon, Vincent Van Gogh, Isidore Verheyden, Vincent Vidal, Victor Vignon, Federico Zandomeneghi. IMPRESSIONISTS. AT THE ORIGINS OF MODERNITY From 29 May 2021 to 9 January 2022 Timetables: Tuesday - Friday 10.00 - 18.00 Saturday - Sunday 11.00 - 19.00 Monday closed last admission 1 hour before closing. Reservation recommended It is possible to buy the presale online on the TicketOne.it website, or directly at the museum ticket office. Access to the exhibition without reservation is guaranteed only in case of available seats