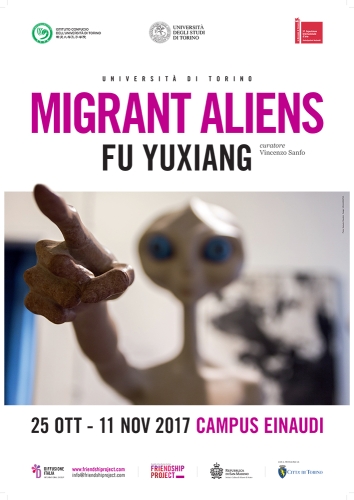 2672/5000 On October 25th at 6.00 pm the installation by Migrant Aliens of the Chinese artist Fu Yuxiang will be inaugurated at the Luigi Einaudi Campus. The artist, one of the most significant in the Chinese contemporary art scene, was born in Chongqing in 1963. He successfully dedicated himself to ink painting and sculpture. He exhibits all over the world, from the Yokohama Museum of Art in Tokyo, to the Metropolitan Museum of Art in New York, at the Grand Palais in Paris; participated in the Venice Biennale within the Friendship Project in collaboration with the Republic of San Marino. On October 25, the aliens disembark in Turin after having received enormous success at the Venice Biennale, where they were exhibited in the context of the Friendship Project involving the People's Republic of China and the Republic of San Marino. The installation, with a notable visual impact, represents a reflection on the theme of migration, which affects the current world at every latitude, and on the concept of diversity that is often linked to this theme: the alien is the different, the one who comes from far away and whose world is little known to us and frightens us, it is perceived as something other than itself and is hardly accepted by society. Until November 11th, 15 aliens will walk through the paths and gardens of Campus Einaudi, UniTo structure that well represents contemporary architecture in the city and which, with its sinuous lines, offers an extremely suggestive setting to the work of Fu Yuxiang . And, wandering unlikely in the gardens, they will attract the attention of the students above all, since it is young people's curiosity and openness not preconceived to the new, but it is at the same time especially the challenge that poses the constant landing in our country and throughout Europe of "aliens" much more similar to us, and with whom even a meeting point is so difficult for us. With this playful but peremptory warning, not avoidable - also thanks to the imposing figures installed - UniTo not only gives space to art, but fully plays its role as a protagonist in the civil and social debate that runs through our city and our society as a whole. The Confucius Institute of the University of Turin supports the work of the curator Vincenzo Sanfo placing itself as a sounding board for the event, also thanks to the involvement of Chinese students from the Department of Humanities, Chinese communities in the city, Chinese students they access the educational offer of UniTo and Politecnico, but also of the Albertina Academy of Fine Arts and the Giuseppe Verdi State Conservatory of Music, places of excellence for artistic training in our city.