Frida Kahlo
a life in pictures 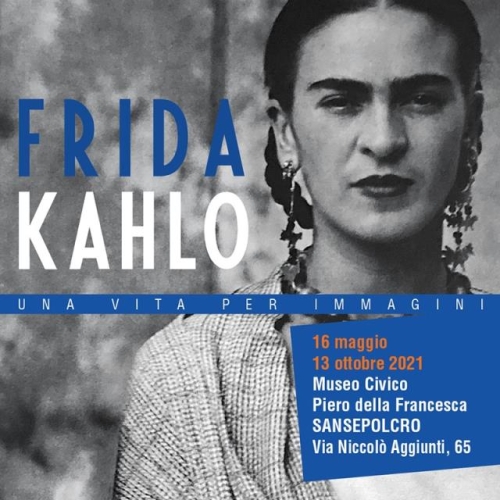 The restart has a date: Sunday 16 May. On that day, not only will the Sansepolcro Civic Museum reopen, a treasure trove of priceless works and a destination for thousands of tourists, but the great exhibition event of 2021 will also kick off, which intends to repeat the success of the one dedicated to Banksy. "FRIDA KAHLO, A life in images": is the exhibition promoted by the Municipality of Sansepolcro and organized by 'Civita Mostre e Musei' and 'Diffusione Italia International Group' and will be open to the public, in the Civic Museum of Sansepolcro, from 16 May to October 13, 2021. The photographic exhibition on Frida Kahlo intends to pay homage to an artist, much loved all over the world, who embodies one of those cases in which art and biography intersect inextricably, making a character unique. To say that Kahlo was a symbol of her time, the first half of the twentieth century, and of her country, Mexico, in a period of fervent social struggles, is certain but also an understatement, as Frida is now an emblematic figure, an contemporary icon, which summarizes in her art the manifestation of an extraordinary female will, out of any space-time coordinate; in it, artistic genius and tearing suffering, lightness and vital torment, a ribbon wrapped around a bomb, as Breton said, represent mirror faces of an existence out of the ordinary. The exhibition project dedicated to Frida Kahlo ideally concludes a trilogy of exhibitions, which began with Mc Curry and continued with Banksy, whose trait d'union is the fascination that these artists, although so different, have on young people. It is precisely to them that we hope the call of the Piero della Francesca Museum will come in particular.