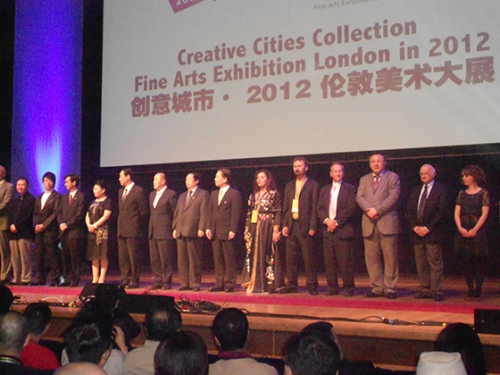 The "OFA" exhibition organized in the occasion of the XXX Olympic Games in London under the patronage of the Ministry of Culture of China included the participation of artists from all over the world. Vincenzo Sanfo was nominated curator for the selection of the artists for the sections 'Europe' and 'Africa'. 110 artists selected have attended the event and make donation of their artworks to the Museum of London; the artists were rewarded with a gold medal and a certificate of participation. The exhibition was organized in London in the rooms of the Barbican Center from August 1st to August 7th, 2012. The theme proposed was "The Thames, the Great Wall, embrace the world" and every artist could draw inspiration from such theme or his own poetry. The exhibition has received popular participation by the artists from all over the world who attended the event and received a great success by the public during the exhibition days.