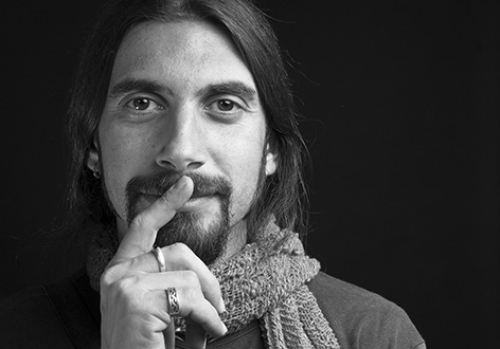 Tony Margiotta was born in 1973 in the small Republic of San Marino. He plays and sings in various bands, until, decided to devote himself to his solo career. Wants to pursue the most appropriate projects for his taste. Rock enthusiast seeking a path of his own, linked to music and art. The music that makes it more and more particular, introspective. The works he creates are always more complex and experimental, the songs are the result of experiments and improvisations recorded live. The guitars, vocals, percussion pass through distortion, delay and reverb creating loops of ethereal sounds and layered and in some songs the texts do not exist, the words are interpreted in a poetic and theatrical. The fine art of Tony (Music, Video, Installations, Paintings) is to make the listener participant, stimulating their feelings and moods, making protagonist involving him. Live Tony uses both music and video media to create a nice atmosphere and surreal. During the winter of 2007/2008 recorded his first CD, "Handle with care ...". In March of 2008 presents the Cd and is caught immediately as alternative, sought, "different." Since that time, countless concerts were characterized by more and more psychedelic and introspective. Specialized newspapers write about the performance of Tony: "I'm not only live concerts, but performances in key music". In the same period is also dedicated to the creation of works of art, poems, writings, events. In 2009 organizes Nott'Arte "The magical night of the art", an event conceived and created with the aim to promote art in all its forms. Nott'Arte is considered an art installation in the open air with the involvement of numerous artists. 2010 is a year of remarkable creativity. It is proposed that the musical work "EYES", a path to the Soul in 9 Moments (works). EYES is a show curated entirely by Tony involving dancers and actresses. In 2010, working with the "C" in Faenza (Festival of Contemporary Art in Faenza) making installation art "Dumbledore and Relax" gaining considerable acclaim. In December of 2010 released the album "Psychedelic Notes", the latest work in Studio.