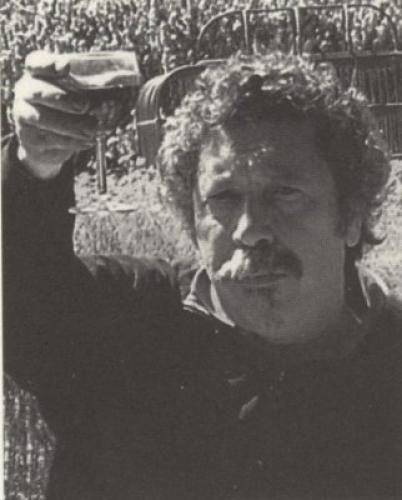 Luigi Mainolfi was born in Rotondi Valle Caudina, Campania, Italy, in 1948. He studied painting at the Accademy of Fine Arts of Naples but soon he moved in Torino, attracted by the great artistic feeling emerging around the Avantgarde movement. He was defined as post-conceptual artist and he moved towards Minimalism. His first works from 1972 and 1976 researches into body and gesture and prefers as expressive's vehicle, the performances. Archetypes and archaic symbols live in his artworks, drawings and sculptures. The human and the fantastic melt together in order to create animal-city, tree-city. object-city as sign of a return to the materical subject. His sculptures take back both in their shape and in materials, to the popular trditions (terracotta, chalk, wood, stone of lava, bronze) and the return towards nature. He is inspired from zoology and biology, whom influence seems to be a part of the ordinated structure of the city, in its geometrical view, or in the surfaces of the terracotta's structure that reminds a complex living texture: the skin. Partecipates at the San Paolo Biennale, at the XL Venice Biennale with "Alle Forche Caudine" in 1981, at the Paris Biennale in 1982. And again at the Venice Biennale with "Trionfo(Elefantessa)" in 1982. Takes part at "Icons and Postmodernism" at the Salomon Gallery, New York 1986. In 1987 he won the Superior Prize at the 5th Henry Moore G.P. in Japan with the great bronze "Gigantic City". In 1990 he obtained a personal exhibition room at the Venice Biennale with "Sole Nero" (water, wax, wood). In the following years he had several personal exhibitions, such as the one at the GAM in Turin in 1995 and the one at the Maschio Angioino and at the Museum Diego Aragona Pignatelli Cortes in Naples, in 1996-1997. In 2001 he was selected for an exchange between italian and japanese artists and he expose at the Contemporary Art Museum where he realized within the Parco Mainolfi "Swims in the Water of Hokkaydo" e "Columns of Sapporo". He realizes "Luci d'Artista" in Turin, with the lighting installation "Luì e l'arte di andare nel Bosco". He joined the 2nd Beijing Biennale due to the selection of Vincenzo Sanfo, curator of the international section.