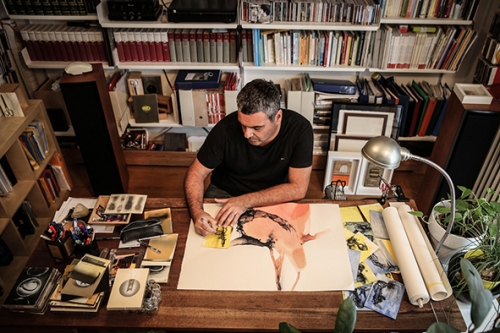 After the degree at the Istituto Statale d' Arte di Urbino, ceramic course, he attended an engraving course at the Raphael's Academy. He also attended the first two years of sculpture section at the Fine Arts Academy of Urbino and after getting a scholarship he moved to Rome where he got his degree at the Istituto Poligrafico e Zecca dello Stato and the degree in Sculpture at the Fine Arts Academy of Rome. Later he got another Master degree in Industrial Design and Project at the Bologna University. He realized one side of the coin for San Marino Republic (1996/2000) and planned an exhibition in 1997 at Palazzo Barberini in Rome and in 1998 at the Temple Gallery of Rome. In the same year he had an exhibition at Museum-Park "Olivello" in Perugia. He realized one side of the argent coin for the Olimpic game in Sidney 2000; in 2001 he exposed at the Spazio Room in San Marino; in 2003 he joined the collective "Titano ti amo" at the National Gallery of Modern Art in San Marino Republic; on April 2005 he was selected for the Contemporary section at the Biennal of Art in Beijing 2005, China; on June of the same year, a personal exhibition dedicated to him, "Identità", was realized at Saint Anne's Church of San Marino. On September another personal exhibition "Il mio pensiero identico" at the Tannino Winebar of San Marino and "Traiettoria/e", a work exposed at the second International Biennal of Art Exhibition in Beijing, 2005; on May 2006 "Vicinanze", a collective exhibition in San Marino (Logge dei balestrieri).