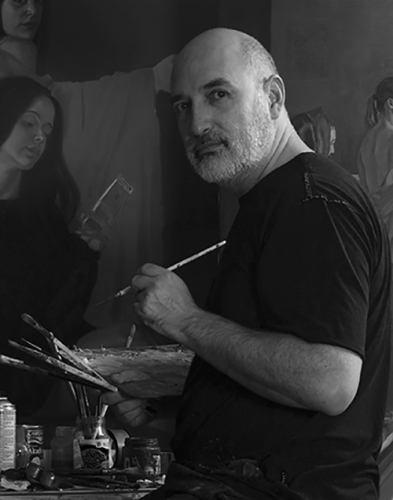 Dario Ortiz (Ibagué 1968) is a Colombian neo-realistic artist known for his contemporary compositions based on classic subjects. He is a leading figure of the Renaissance of the contemporary narrative art in Latin America. Self-taught artist. Since 1995, he has been a contributor to the Ibaque newspaper, El Nuevo Día. Ortiz publications include the books: Oscar Rodríguez Naranjo, the painter of beauty (1996), Neorealism (2000), in collaboration with Carol Damian, and the essays Vásquez de Arce y Ceballos drawings (2007), A Brief History of the arts in the territory of Tolima (2007), and A novel painted (2008). In 2003 Ortiz founded, and is the head of the Museo de Arte del Tolima in Ibagué. From 2007 he is member of the Academy of History of the Tolima. Today Darío Ortiz divides his time between México City and Madrid.